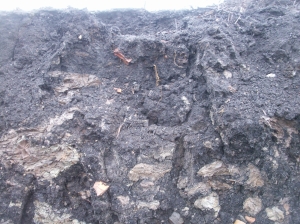 What’s the difference between soil and dirt?

Dirt is what you find under your fingernails. Soil is what you find under your feet. Think of soil as a thin living skin that covers the land. It goes down into the ground just a short way. Even the most fertile topsoil is only a foot or so deep. Soil is more than rock particles. It includes all the living things and the materials they make or change.

Let’s take an elevator ride from the surface to the bedrock below. We’ll pass several distinct layers, or horizons, as we go. Together, these layers form the soil profile. Going down!

Plants grow and animals live here. A thick cover of plants can keep the soil cool and keep it from drying out.Decomposersrecycle dead plants and animals into humus.

Plants grow and ani mals live on top of the soil. This is sometimes called the organic layer. A thick cover of plants can keep the soil cool and keep it from drying out.Decomposers recycle dead plants and animals intohumus.

Subsoil:This is a mix of mineral particles and some humus near the top 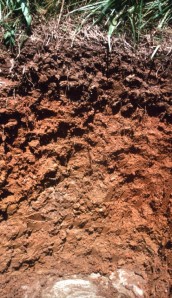 . Subsoil is very low inorganic mattercompared to the topsoil. This is the layer where most of the soil’s nutrients are found. Deep plant roots come here looking for water. Clays and minerals released up above often stick here as water drains down.

This horizoncan be very deep. There’s no organic matter here at all. We’re out of reach of all living and dead organisms down here. It’s all rock particles, full of minerals. The entiresoil profileused to look like this all the way to the surface. Physical weathering broke theparent materialup into small pieces. Don’t be fooled! This layer may contain rock particles that are different from the bedrock below. A river or a glacier might have brought it from somewhere else.
Bedrock:We finally found solid rock! The bedrock formed before the soil above it. It will wait here until erosion or an earthquake exposes it to the surface. Then some of it will be weathered to become the next batch of parent material. The soil-making process will start all over again.

1 thought on “The Dirt on Soil”